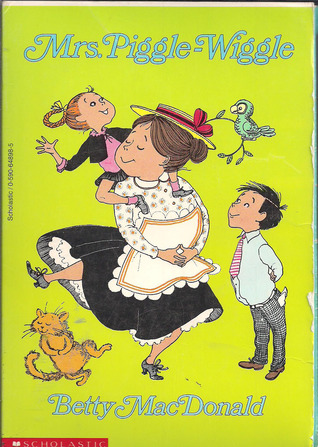 Everyone loves Mrs. Piggle-Wiggle. Mrs. Piggle-Wiggle lives in an upside-down house ans smells like cookies. She was even married to a pirate once. Most of all, she knows everything about children. She can cure them of any ailment. Patsy hates baths. Hubert never puts anything away. Allen eats v-e-r-y slowly. Mrs Piggle-Wiggle has a treatment for all of them.

The incomparable Mrs. Piggle-Wiggle loves children good or bad and never scolds but has positive cures for Answer-Backers, Never-Want-to-Go-to-Bedders, and other boys and girls with strange habits. ‘[Now] in paperback . . . for a new generation of children to enjoy.’ — San Francisco Examiner Chronicle. 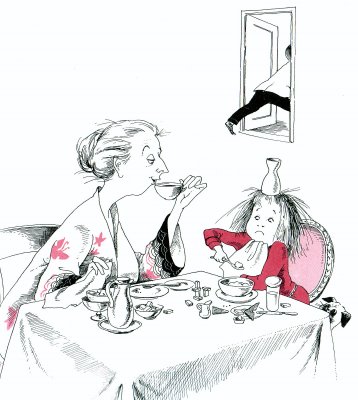 Illustrated by both Maurice Sendak and Hilary Knight, MacDonald began telling the Piggle-Wiggle stories to entertain her children.  MacDonald also originally wrote adult novels (more below), but her tales of the enchanting Mrs. Piggle-Wiggle took off and became very popular among children.

Published in the forties, MacDonald used her writing to create a whimsical neighbor, Mrs. Piggle-Wiggle, who loved all children, who had a house that smelled of sugar cookies, and who helped parents “cure” their children of common ailments.  What kind of ailments? The Interrupters (children who interrupted), The Never-Want-To-Go-To Schoolers, The Show Off Cure, and the Slowpoke.  The Radish Cure is one of Mrs. Piggle-Wiggle’s famous cures for children who didn’t like wash or bath.  Parents were instructed to let a child get so dirty, that when there is enough dirt on the arm, plant a radish seed.  When the radishes bloom, that child would quickly take a bath! Mrs. Piggle-Wiggle is charming and delightful for parents and child readers. I had worn copies of these books as a child, and I plan to keep a box set to read to my own children.  Truly, this is a fantastic classic set of stories!

MacDonald, as mentioned, did write several popular adult novels, too. Her memoirs are quite popular, and, in fact, Onions in the Stew, is a great look at how she lived on an island in Puget Sound with her husband and teenagers during the fifties.