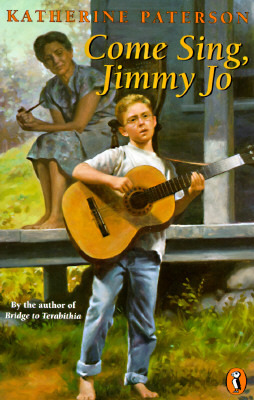 The Johnsons are becoming country music stars. They’re on TV and the radio–and it’s all because of James. His voice and his guitar playing bring the songs to life, and make the audiences beg for more. Most kids would love it. Not James. He’s had to change his name to “Jimmy Jo,” dress in clothes he hates, and turn into someone else. Will he ever be able to cope with the fame?

James is a West Virginia boy who has a beautiful singing voice but a fear of being in front of audiences.  His family, the Johnsons, are gaining popularity as a traditional country band, and their manager wants James to bring his voice, too.  James and his Grandma has a special bond, and she encourages him to go out on tour with his parents, grandfather, and uncle.  James is hesitant to leave her in the mountains of West Virginia for the tidewater of Virginia while they tour.  In Virginia, James is known as Jimmy Jo in the band, and he begins to live nearly two lives: one as a regular public school student and the other as a famous country singer.

Out on the road, James connects with the audience and becomes confident and joyous in singing with his family, often relying on older hymns.  This, however, doesn’t go over too well with the entire group.  In fact, his mother lets James know that she doesn’t like to be upstaged by anyone, including her own son! James goes through a literal and figurative transformation as he becomes star in his own family country band while learning the truth about his own family.

Katherine Paterson is a fantastic children’s author, and I only recently discovered this gem of hers.  She portrayed the life of West Virginia family very well from the home deep in the holler to the dinners of beans.  As I discussed in a previous post on Appalachian children’s literature, poverty is a theme that represents the often real lack of resources in this region. James’ family is not rich, but they have sights on sharing their music to the rest of the region.  In fact, when James gets to their rental home in Virginia, it has amenities that he’d never been able to use.

I like the juxtaposition of James in each of these places, and how it reinforces his connection to home. Furthermore, the familial relationships are reflective of how Appalachian families are fiercely connected, yet fight among each other.  The character of James is well written in his young adult vulnerability, insecurity, and sweet nature; his emotions regarding family news are realistic. Paterson does an excellent job of writing about James, who is an Appalachian boy, and his journey as a child and country singer.  Furthermore, Paterson must well know Appalachian families because her mountain setting, passionate family, and use of themes like poverty reflect the regional struggles.

I recommend this book to intermediate/young adult readers, especially those with interest in music or mountains.  Paterson’s book is a great example of Appalachian children’s literature.