Youth Lit Reviews always has great young adult reviews (along with other literary fun), and had a great guest post review of Reunited: 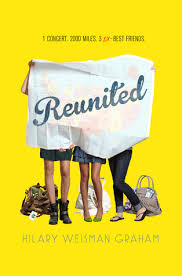 “Former best friends and devoted Level3 fans, Alice, Summer, and Tiernan, have avoided each other all throughout high school. However, when Alice sees that Level3 is reuniting for a one-time show, she takes it as a sign. Impulsively, she buys three tickets, and asks Summer and Tiernan if they would like to tag along. The girls reluctantly agree, having no idea what they are getting into. On the 10-day road trip to Texas, obstacles keep popping up – everything from broken car doors to lost purses. Can the girls overcome the roadblocks and finally forgive one another?”

Through this review, I discovered this fabulous blog, Ciao Bella – who had post 10 Authors who Deserve a Shout Out

3. The Babysitter’s Club is on Netflix!

The Baby-Sitters Club is a 1990 American television series based on Ann M. Martin‘s children’s book series of the same name. The series originally aired on the The Disney Channel, but was also broadcast on HBO and Nickelodeon; all thirteen thirty-minute episodes were also released to home video. The TV series and the novels were both produced by Scholastic Corporation. As of June 1st, 2013, the series was made available on Netflix instant streaming.

(Also, for those who love eighties/nineties series – The Saddle Club is also on Netflix.)

The Saddle Club is a children’s television series based on the books written by Bonnie Bryant and is an Australia/Canada co-production. Like the book series, the scripted live action series follows the lives of three teenage girls in training to compete inequestrian competitions at the fictional Pine Hollow Stables, while dealing with problems in their personal lives. This series debuted in 2001 and ended in 2003. However, due to popular demand, the series was renewed for a third season with new actors since the original ones were considered too old. The series revolves around the experiences of three girls, who form a club named “The Saddle Club” after recognizing their shared love for horse riding. Their natural rival is another young rider at the barn named Veronica DiAngelo.

The Law Firm that Leaked the identity of Cuckoo’s Calling as J.K. Rowling

What are you reading, pinning, or watching this week? Let me know! Don’t forget about the huge Return to Cardamom Giveaway – plenty of time to read reviews and enter for a copy of the book AND a $50 giftcard!